The Incompatibility of Anti-natalism and Utilitarianism

In this article I consider the argument put forward by David Benatar on Cosmic Skeptic's podcast that the Axiological Asymmetry Argument is compatible with Utilitarian views.

Let us refresh our memory as to what the argument actually is:

(2) The absence of pain (or harm more generally) is good even if that good is not enjoyed by anyone; and

(3) The absence of pleasure (or benefit more generally) is not bad unless there is somebody for whom this absence is a deprivation. (Benatar, 2018) 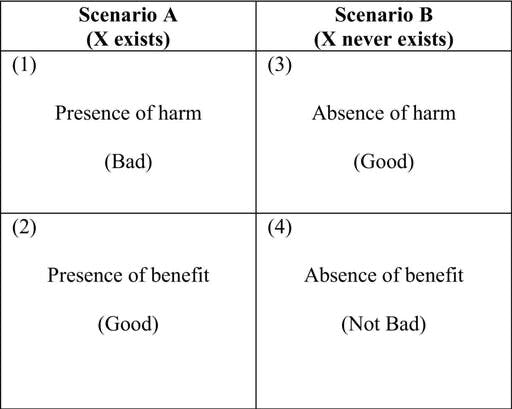 The conclusion of course from these axioms is that bringing a thing that is subject to the experience of pain (harm) or pleasure (benefit) is not acceptable. Those experiences are respectively bad and good. But what if one is a utilitarian? Benatar likes to claim that it fits in with the utilitarian views just fine. Let us analyze with a hypothetical to see whether this actually holds up.

Suppose we had a time machine that would rewind time itself and reset all human beings and creatures in the universe to be sterile (so as to not produce offspring). In other words consider the scenario where the universe did not conspire to bring into existence conscious creatures that can reproduce. In this universe the creatures would all reproduce for nearly fifty-thousand years and one day the universe would make it physically impossible to reproduce due to some law of nature. By Benatar's position, it would be bad there are conscious creatures that have to be exposed to suffering, but good that the suffering would end because of the cessation of existence of progeny. In other words it is a better world than our world.

But what of our world? Presumably there are creatures on other planets (and our own) in the galaxy that are being brought into suffering by the laws of nature. Nature prefers suffering. This is where consequentialist views like utilitarianism come into play. It is of no doubt that in order to alleviate pain (suffering) for the many it is enough to agree to cease to exist. But what of those that cannot do this thinking. What of creatures that cannot consent, but nonetheless experience? Consider the scenario where no living creature chooses to expose itself to suffering as soon as it becomes capable of thinking and consenting. In this universe the aggregate suffering will still remain positive. Why want this universe when it's possible to have net positive pleasure (albeit with some suffering initially) simply by being the species to take up the service of suffering to alleviate the pain of the many?

This is not a zero sum game. It's possible to achieve goodness for everyone by being the one to take the bullet. This is the flaw in Benatar's argument. If we only look at ourselves as individuals as opposed to what we actually are (a society), it will lead to a very selfish kind of life. One filled with no empathy for the future generations that are beyond our reach. The ones that will have to learn for themselves what suffering is. In light of this hypothetical, it is clear that we have a refutation for the claim that axiological symmetry if true, would apply to utilitarians.